For octopuses, mating is a brief, detached affair, followed shortly by death. They might be the most intelligent life-forms on the planet, but their 500 million large neurons don’t seem to have livened up their love-life.

They practice ‘external fertilization’. In some species, males insert their spermatophores directly into the famale’s tubular breathing funnel. Other species literally hand her the sperm, which she always accepts graciously with one of her right arms, leaving us to assume it’s a cephalopod faux pas to use a left arm.

Soon after the deed is done, Romeo/Romeos die, leaving Juliet, once their 400,000 strong brood has hatched, to die in quick, tragic succession.

Octopuses live just 3-5 years. 500 million years of evolution has taught them time for romance is scarce. Makes you wonder what they could achieve if they were given the human lifespan…

A note on plurals:

‘Octopus’ comes from the Greek meaning ‘eight foot’. The word’s Greek roots mean it’s pluralised as a Greek word, which means adding -es and not ‘i’ or ‘ies’.

Please email me at

Show the world your tentacular attention with an my octopus tee 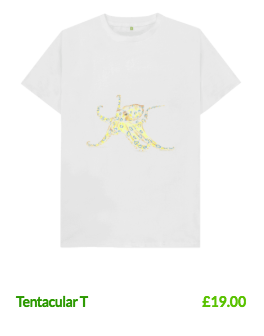